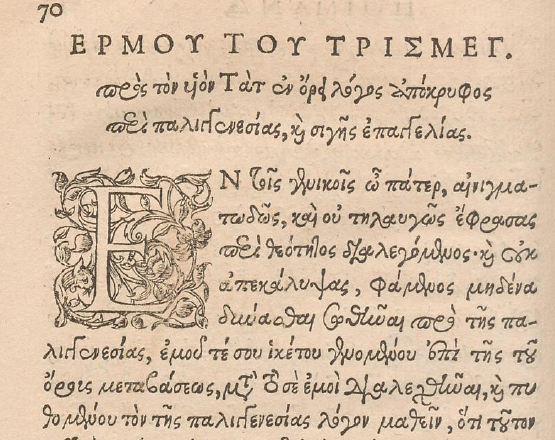 Some Notes On Translating Tractate XIII

As with many of the tractates of the Corpus Hermeticum, the Greek text of tractate XIII provides an interesting insight into ancient Hellenic paganism and mysticism. It also – as with most of those tractates – presents the translator with certain problems, sometimes related to textual corruption, sometimes grammatical (should ῥοίζῳ, for example, in v. 9  of XIII be related to νικηθεῖσαι or to ἐξέπτησαν) and many of which problems concern the variety of meanings which can be assigned to certain words, as for instance in the important matter of νοῦς which is invariably translated as either "intellect" or as "mind", neither of which is satisfactory especially given what both of those English words now often denote almost two thousand years after those Greek tractates were written.

My own choice in this tractate in respect of νοῦς – as in my translations of other Hermetic tractates – is perceiveration/perceiverance, which, even though such English words hint at what I believe νοῦς meant and implied esoterically and philosophically in Hellenistic times, are not entirely satisfactory. The only reasonable alternative seems to be a transliteration, as I do in this tractate – and have done in other tractates – in respect of λόγος, θεός and several other Greek words.

Such problematic words occur not only in the title of tractate XIII but also from the very first line of the text. In respect of the title – Ερμού του τρισμεγίστου προς τον υιόν Τάτ εν όρει λόγος απόκρυφος περί παλιγγενεσίας και σιγής επαγγελία – there is the question of translating (i) Τάτ, (ii) λόγος απόκρυφος, (iii) παλιγγενεσία, and (iv) ἐπαγγελία. In respect of the first line there is the question, at the very beginning, of Ἐν τοῖς Γενικοῖς, and what ὦ πάτερ – and the related ὦ τέκνον – might imply.

All of which questions – and the many subsequent ones together with the Cantio Arcana (The Esoteric Song) of sections 17 and 18 – make tractate XIII most interesting in regard to ancient Hellenic paganism and mysticism.

A conventional translation of the title (by GRS Mead) is: "Concerning Rebirth and the Promise of Silence Of Thrice-greatest Hermes unto Tat his Son."

My translation, however, is:

"On A Mountain: Hermes Trismegistus To His Son Thoth, An Esoteric Discourse Concerning Palingenesis And The Requirement of Silence."

Which translation requires some explanation:

Thoth. As in other tractates I translate Τάτ by Thoth, avoiding the conventional Tat which, in English, has a colloquial meaning inappropriate here. As to which 'Thoth' is meant, the consensus is that in this and some other tractates it refers to the son (possibly biologically or more probably metaphorically) of Hermes Trismegistus who himself was named by the Greeks as Thoth, with the Τάτ of some other tractates being a scribal corruption of the name Thoth.

Esoteric Discourse. λόγος απόκρυφος. While 'esoteric' is an apt translation in regard to απόκρυφος, 'discourse' is not entirely satisfactory in respect of λόγος since it could be here interpreted to mean 'disclosure' or 'explanation'. However, given what follows in section 1 – πυθομένου τὸν τῆς παλιγγενεσίας λόγον μαθεῖν…παραδιδόναι μοι – 'discourse' does seem appropriate.

Palingenesis. Rather than ascribe a particular meaning to παλιγγενεσία – such as 'rebirth' or 'regeneration' – I have chosen the English word palingenesis (from the Latin palingenesia) with that word explained by what follows in this particular discourse, qv. sections 12 and 13.

Requirement. The sense of ἐπαγγελία here, given what is discussed in this tractate, is 'requirement' rather than the strident 'command' or what is implied by the rather vague word 'promise'.

Conventionally: "In the General Sermons, father, thou didst speak in riddles most unclear, conversing on Divinity."

When, father, you in the Exoterica conversed about divinity your language was enigmatic and obscure.

Which translation, as with title, requires some explanation:

Father. The Greek ὦ πάτερ – literally 'my father' – is a polite form of address, akin to the English 'sir'. Similarly, ὦ τέκνον – 'my son' – is a polite reply. Given the esoteric nature of the text, a possible interpretation here of ὦ πάτερ would be 'Master', and of ὦ τέκνον 'my pupil'.

in the Exoterica. Ἐν τοῖς γενικοῖς. Since the term γενικῶν λόγων occurs in tractate X it is reasonable to assume that γενικός here refers to the same thing although the meaning of the term is moot given that no details are provided in this tractate nor in tractate X, nor in Stobaeus  – Excerpts, III, 1 and VI, 1 – where the term also occurs. While most translators have assumed that it refers to 'generic' things or 'generalities' and thus (by adding λόγοι) have opted for an expression such as 'General Sermons', and given that a transliteration – such as genikois or genikoi – is awkward, I have in respect of the γενικοὶ opted for exoterica (from the Latin via the Greek τὰ ἐξωτερικά) with the meaning of "exoteric treatises designed for or suitable to the generality of disciples or students," with the plausible suggestion thus being that there are exoteric Hermetic treatises and esoteric Hermetic treatises, with Reitzenstein describing these other treatises as διεξοδικοί λόγοι (R.A. Reitzenstein. Poimandres. Teubner, Leipzig. 1904. p.118) a distinction he also mentioned in his later work Die Hellenistischen Mysterien Religionen. One such esoteric treatise is tractate XIII.

This much translated part of XIII has, in my opinion, been somewhat misunderstood given, for example, that θεὸς has invariably been translated by 'God' – implying as that word now so often does the God of Christianity – and φῶς (as in translations of the New Testament) translated by 'light', with ἀλήθεια as some kind of abstract 'truth', and with ὕμνος as 'hymn' suggestive as that English word now so often is of the hymns of Christian worship.


Conventionally, the first few verses are translated along the following lines:

"Let every nature of the World receive the utterance of my hymn!
Open thou Earth! Let every bolt of the Abyss be drawn for me. Stir not, ye Trees!
I am about to hymn creation's Lord, both All and One.
Ye Heavens open, and ye Winds stay still; and let God's deathless Sphere receive my word."

My translation [1] is as follows:

Let every Physis of Kosmos favourably listen to this song.
Gaia: be open, so that every defence against the Abyss is opened for me;
Trees: do not incurvate;
For I now will sing for the Master Artisan,
For All That Exists, and for The One.
Open: you Celestial Ones; and you, The Winds, be calm.
Let the deathless clan of theos accept this, my logos.

Which, for me at least, evokes – as tractate XIII does in its entirety – something redolent of paganism rather than of Christianity.

Image credit:
The beginning of tractate XIII from the book Mercvrii Trismegisti Pœmandres, published in Paris in 1554