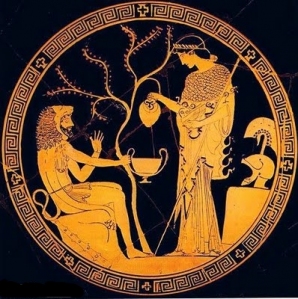 [...] That seeking of - that hope for - a personal love loyally shared. Which seeking and hope for such a love, surely, is one intimation, one sign, of our real human nature; another of which is, surely, to learn about, to appreciate, the numinous treasures that preceding generations have bequeathed to us in and thorough our human cultures - in our Art, literature, music, the ancestral wisdom of the πάθει μάθος of our ancestors, written or aurally transmitted, and in the numinous insights that were the genesis of most if not all those Ways of Life now known by the generic term religion before such insights became enshrined within such dogma and such causal forms as bled away their life-giving Life. Yet another is, surely, to seek to always be honourable and thus to try the live the natural, the balanced, middle way between ascetic self-denial and the excess, the lack of self-control, that leads to ὕβρις, to personal arrogance and to indifference to suffering. This is the middle way of empathy, personal love, personal honour, and appreciation of the numinous, of the natural distinction between the sacred and the profane.

These hopes, desires, these reasons to possibly be optimistic, are the essence of The Numinous Way; of the very individual reformation and evolution of ourselves by means of empathy, honour, compassion and love. And it is this individual reformation, this individual change, by such means, which in my admittedly fallible view is important, which is numinous, which expresses the essence of our human nature as consciously aware human beings possessed of the faculties of empathy, of reason, and of will; and which is the summation of my own learning from over forty years of diverse experiences and the making of so many mistakes, of transgressing so many limits.

Thus, what I now feel is irrelevant is politics - of whatever type or form; what is equally unimportant are religious dogma, creeds, and such impersonal conflict as arises from all causal abstractions. For all of these are causes of, the genesis of, suffering and all involve and all have involved the loss of personal love, the loss of compassion, the loss of empathy, and the loss of reason. All plant the seed of ὕβρις within us.

For we human beings - being capable of using reason, possessed of empathy, able to be compassionate and honourable and needful of the numinosity of a personal love - do not need, and never really have needed, speeches, propaganda, manifestos, a sense of destiny, the machinations and promises of political and religious leaders, or social, political, or even religious, reforms.

All we need is to know, to feel, the beauty of a personal love loyally shared; to use and develope our empathy, and to be honourable. Thus can we know, feel, the numinous - and thus can we avoid the error of ὕβρις. And thus if I have some last words to write, to say, it is these.

What, therefore, remains? Only such hope that such words, that such a numinous way as I have somehow managed to uncover, might inspire some, or perchance provoke a reasoned and thoughtful response in some others. What is there now, and what has there been? One genesis, and one ending, of one nexion whose perception by almost all others is now of one who lived and who wrote ἐξ αἰνιγμάτων.

Extract from a letter to a friend

[1]  Thus, he of great Age, his foliage drying up
And no stronger than a child, with three feet to guide him on his travels,
Wanders - appearing a shadow in the light of day.